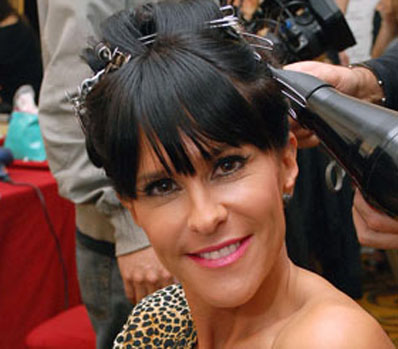 “I am still faithful to Cholo, despite what is happening to us, which is not a little“, He said Caroline Baldini in August 2008 about his relationship with Diego Simeon, the father of her three children. In the summer of that year, photos of him had appeared in San Bernardo, very close to an unknown lifeguard who was renamed in the media he-manfor his resemblance to the cartoon hero. It was later found out that his name was Fabian Orlovsky. Months later the postcard of the two together was repeated in Playa del Carmen, where they had “met by chance”. Later they would Brazil. The scandal was of great proportions.

Carolina Baldini and He-Man on the cover of Paparazzi magazine

At that time, Carolina assured that both were faithful to each other, although she recognized that there was a crisis with Simeone. “We are seeing what happens”he doubted, and assumed that those photos published in a magazine were difficult for the former soccer player to assimilate. “I know that for him it was not pleasant. Fabian and I are very good friends. I believe in friendship between man and woman. Besides, it was a chance encounter. I was in the Rivera Maya and he was making money in Playa del Carmen, because he is a lifeguard. And since we were 45 kilometers apart, he came several times to visit me. Obviously nothing happened, I was with my children. I don’t like her, but I’m used to them inventing romances for me”.

However, a year later, Baldini declared that she was separated and without much chance of returning. “We love each other very much, we can spend an afternoon together with the boys, but as a couple we are separated. We even sleep in different houses. When we met (with Simeone) I was 18 years old. We live a lot of things together, but sometimes there are movements in the couple that makes one get to distance himself.

Thanks to the mentioned caps, Fabian Orlovsky He was gaining more and more notoriety and became one of the characters of the moment: “With her, a friendship was generated. We always chatted, she knew my daughter, I knew her boys. With Caro we have many things in common. She really likes sports and traveling… Just like me. That’s why we get along so well“, He said he-man.

The relationship between them never went beyond rumours. “At that time he was a friend of Carolina Baldini. The photos are in Mexico, I was there and we already knew each other beforehand. And well, we meet. Nothing else”, he said three years after being caught red-handed with Carolina. and he added, in dialogue with Alexander Fantinus: “Although it is true that it changed my life, time has passed since that exhibition, already a year ago. And it would be like they are stirring in something that was already”.

Despite having had his moment of fame, he tried to maintain his previous life. “I am a teacher of Physical education. I work giving classes in La Plata, in state schools and also private ones. And I’m also a lifeguard during the summer season in San Bernardo. And well, now I’m a model ”, she was sincere. A the cholaas Baldini was called, the exposure and the rumors earned him a space in the Dancing by Marcelo Tinelli.

After he-man became a “celebrity”, in 2010 the former Jau Match and the current technical director of the Atletico Madrid they reconciled. “We are dating. The breakup brought us together.”they said on their way back from some sort of honeymoon in Miami. However, a lot of water had already flowed under the bridge, and nothing was ever the same after the aforementioned rumours. At the time, the parents of Giovanni, Giuliano and Gianluca Simeone distanced themselves definitively.

Carolina Baldini in Dancing for a Dream

Last week Baldini recalled his breakup with the father of his children. And then again those photos with he-man dusted off in the collective memory. “I am calm because I gave everything in the couple. We started when we were very young. I met him when he was 18 years old, and the love ended. Today, everything is resolved: more than 10 years have passed. For the boys it was painful. We both sat down. I couldn’t talk much and it was Diego who told it. Giovanni was 15 years old and some tears fell. The other looked and the little boy was walking around. But, for the children, seeing their parents calm is the best thing that can happen.”

He did not reach the final but thanks to the winner he fulfilled his dream: Rafael, the dancer from The 8 steps who moved Guido Kazcka
Pampita, intimate about her way of mothering and breastfeeding: “We have to hug each other among women and not judge”
Secrets and legends of Titans in the Ring: from Alberto Olmedo’s fighter to Arturo Illia’s question about The Mummy
Roberto Pettinato spoke about the health of his son Felipe after the fire in his building
Martín Fierro 2022, from the inside: what the figures ate, the emotion contained by the pandemic and Dieguito Maradona’s table

Carolina Baldini and a bath boy nicknamed He-Man: 14 years after the scandal that caused the separation of Cholo Simeone